Richard Hamilton at The National Gallery 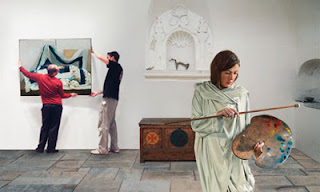 The show of Richard Hamilton's last paintings is delightfully dislocating. The works are not all that large but they create a dizzy sense of space. A maid vacuums a hotel lobby (she's naked as it happens) behind her hangs a painting of another hotel lobby, the same painting is hanging in the exhibition room.
The games with space make the sense of illusion extremely vivid. The palette in Portrait of Woman as an Artist (shown here) seems so real that I would not have felt much in the way of shock if the woman had come to life and handed it to me through the frame.

Read more »
Posted by Caedmon at 6:24 AM No comments: Links to this post 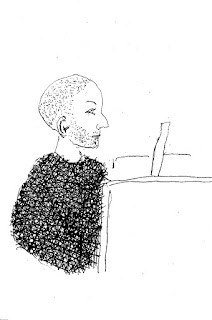 The hard drive on my sister's Mac went crunch. She keeps no back-up. I took it to my nearest internet cafe and Khamel saved the data and found a new hard drive.
Posted by Caedmon at 10:10 AM No comments: Links to this post