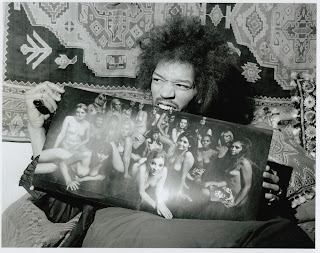 Jimi Hendrix takes a bite at the sleeve of the British version of Electric Ladyland in his London flat in early 1969. The playful gesture reflects his true feelings - he disliked it and was frustrated that his own ideas had been overlooked. The previous autumn, while on tour in the States, he had sent a visual of his own design back to Track Records, his London label.
Kit Lambert, co-owner of Track, ignored Jimi's wishes and pursued this characteristically outrageous cover. It must be said that a photograph and design are splendid, whatever Jimi's feelings. The design was the work of David King, art editor of the London Sunday Times' colour magazine supplement. King's vivid yet disciplined graphic imagination, and eye for images which could be both shocking and hauntingly beautiful had established a style of magazine design which was much imitated and has in many ways yet to be bested. King carried his talent for stirring up guilt and desire simultaneously in the eye of the beholder onto the sleeve of Electric Ladyland. Almost half a century later, when images of naked women are commonplace in mainstream media, and in endless supply via the internet, this picture still has the power to burrow into the pysche. The photograph was taken by David Montgomery and the women were recruited from the street, outside Montgomery's studio in Edith Grove, the shabby end of London's Chelsea, where all sorts of interesting things happen.

I would very much like to interview any of the women who posed for the photograph. If you can help please leave a message in the comments.
Posted by Caedmon at 3:22 AM No comments: Links to this post