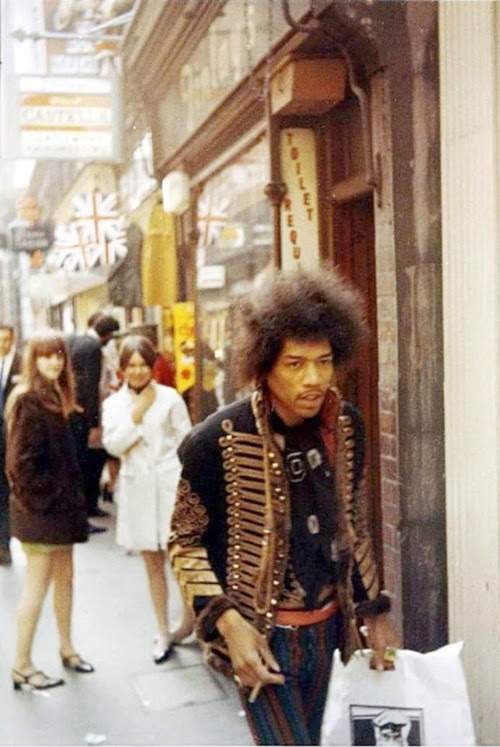 This candid photo of Jimi Hendrix out shopping emerged as a lot in a sale of Pop Art at Christies last year. In the era of the smartphone we are used to seeing pictures of the famous caught off their guard, in the 1960s they were more unusual. Jimi carries a bag from I Was Lord Kitchener's Valet,  a boutique which specialized in selling retro military costumes. In his right hand Jimi has a cigar, which he has presumably just purchased from Finlay's the tobacconist, just behind him. Playing Sherlock Holmes, we might deduce that the photographer had seen Jimi go into Finlay's and waited for him to come out.
Jimi was left-handed but as child he was put under immense social pressure to use his right-hand and in adult life he wrote as well as smoked right-handed.
What is most striking about this un-posed photograph  is that it shows Jimi's very pronounced stoop. He was also pigeon toed and walked what a shuffle. Like Baudelaire's albatross, out of his element he was maladroit.

Posted by Caedmon at 2:45 AM No comments: Links to this post