THE LARGEST PHONE BOOTH IN LONDON

There was once in my life a seedy pub, on a seedy street, which did not encourage strangers. The landlord was tired of it all, waiting for the brewery to bribe him to retire, and content with a customer base of half a dozen old men.
One of these old men was my Father, who was dying, so I went to the pub to try to encourage him to eat. The landlady was not jaded at all, and willing to cook lunches, in the unlikely event of her being asked to.  My Father had collapsed in mind and body after my Mother had died the year before. He would attempt a lamb chop with chips and peas if it was put in front of him.
Apart from my Father, the only other people who ate there were a pair of young secretaries from the law practice across the road. Every week day both of them would demolish an enormous lunch, each talking so furiously together it was hard to see where they found time to shovel their food in. It was a delight to witness such greed for life, under the circumstances.
What passing trade there was came in to use the pay-phone. It is hard to conceive of now that cell phones are ubiquitous how suddenly they have overwhelmed us and how recently it was that you had a home phone or nothing, and the people who had nothing thereabouts had to come in and boom their personal affairs across the empty saloon bar. One of the nick names the old regulars had for the pub was “the largest phone booth in London”.
Read more »
Posted by Caedmon at 6:28 AM No comments:

Email ThisBlogThis!Share to TwitterShare to FacebookShare to Pinterest
Labels: my stuff 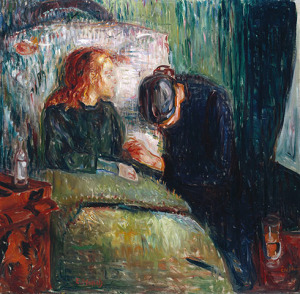 I don't care for Tate Modern all that much: with the crowds charging along the corridors it feels to me like an airport without aeroplanes. It seems to make plenty of other people happy and perhaps some of them, or most of them, find the metaphorical flights that I miss.
This summer Tate Modern hosts an exhibition of Edvard Munch's 20th Century Paintings (minus any versions of The Scream). One of the best exhibitions I have ever been to was a show of Munch at the National Gallery in 1995 (or thereabouts). It was one of the most emotionally charged spaces I have ever encountered.

A couple of months ago Glenn Reynolds mentioned my book on his world famous blog. Seems only fair to return the favour.

Posted by Caedmon at 6:02 AM No comments:

I still long to change the World, I'm still looking for new England

Suzanne Moore's column in G2 today reminded me of why I love both her and her writing.
Apparently there's an official London Olympics playlist. It has long struck me that if you are an international organisation which likes to descend on cities and tell everyone what to do, London is not the best city to descend on.
Never mind the bollocks, what I liked was Suzanne's evocation of Punk which we both lived through as teenagers.

How to cook a woman 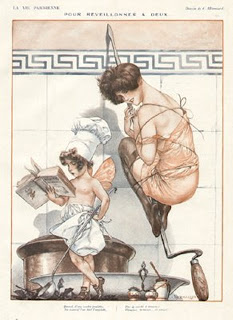 More answers to Silly Questions.
You are the prisoner of a tribe of cannibals. What recipe would suit you best?

lol. this is an awesome question..they should cook me in a great big pot with lots of veggies (carrots, potatos, celery..), some herbs and spices..i'd make a delicious meal..lol!

Braised. I am tough.. followed by a rather tart lemon sorbet just  to kill the rather bitter taste.

I want to say that I'd make an awesome sorbet, because I like that idea, but realistically speaking, I think me-sorbet would be pretty disgusting. Okay, I'd like them to serve me in tacos, then. With salsa verde. And plenty of hot sauce. I like Chilango's.
Read more »
Posted by Caedmon at 2:18 AM 5 comments: 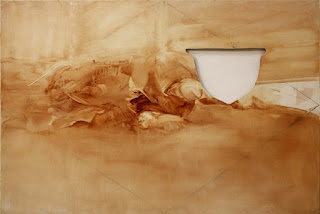 I've just returned from the press preview of the Central Saint Martins Degee Shows 2012. Such clever (and beautiful) young people. It feels wrong to single out one artist from a dgeree show but it is impossible not to have have favourites and I was both impressed and moved by the paintings of Molly-Clare O'Donnell. This JPG taken from her website does not do full justice to the delicacy and subtlety of her work. The figurative elements of her paintings unfold themselves much more slowly when you view the actual painting.
The shows are open to the public over the next week: Friday, Monday and Wednesday 12 to 8pm, Saturday  and Thursday 12 to 6pm, closed Sunday, at the new  Central  Saint Martins building, 1 Granary Square, King's Cross, N1C 4AA. 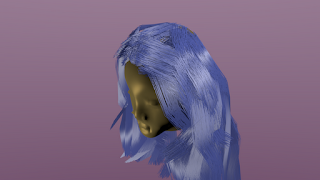 Playing with Blender again: what do you think? Comments welcome.
Posted by Caedmon at 1:44 AM No comments:

Email ThisBlogThis!Share to TwitterShare to FacebookShare to Pinterest
Labels: Blender, my stuff

The Genius of Mees-Hell Sang 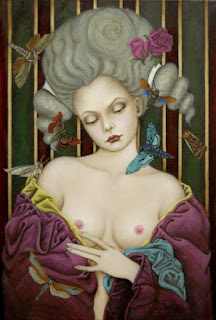 Painter and photographer, Polish born, London based, Mees-Hell Sang has an issue of HorrorZine dedicated to her work. Go and enjoy
Posted by Caedmon at 1:57 AM No comments: 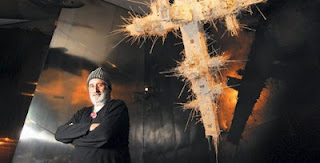 When I arrived for 7.30am Mass this morning, I found Gerry Judah's fibreglass sculpture The Crusader is now installed at the back of my parish church. The version is different from the larger version shown here (and originally commissioned for the Imperial War Museum North). This version is smaller and in a ferric red which tones in well with the Victorian brickwork of William Butterfield. 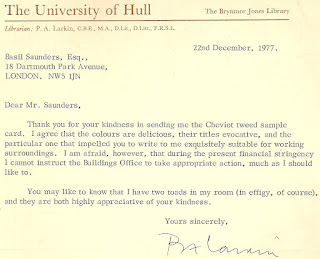 Over at the National Review Peter Hitchens writes about the Collected Poems of Philip Larkin.
It's an inspired commission on somebody's part because the reputations of both men lie under the shadow of the disapproval of received opinion.

I photographed this young male close to the tumulus (sometimes called Boudicca's Mound) just after sunrise a few summers ago. I used it as the cover for my poetry collection.
The poem below is about another occasion.

Jimi Hendrix at the Saville Theatre 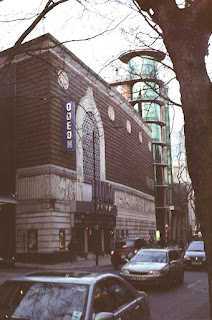 The Saville Theatre, photographed here on a gloomy December afternoon, is a cinema now. Forty-five years ago this weekend, on a bright June evening it hosted ten minutes of Rock And Roll History.
Even in the Swinging London of 1967 puritan shadows still flickered around Sundays. During the week The Saville Theatre was a comedy theatre. That summer Spike Milligan was in a one man show there, but on Sundays the Saville was dark, like every Theatre along London's Shaftesbury Avenue.
Brian Epstein, the Beatles' manager had taken out a lease on The Saville, as one of his many interests, and used the empty Sunday nights for pop concerts. On Sunday June 4th the auditorium was flooded with famous faces: all four Beatles were there, Eric Clapton and Lulu among many others. Everyone who was anyone had come to hear The Jimi Hendrix Experience.