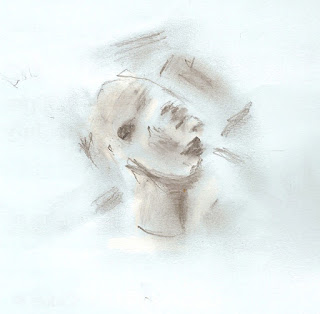 When we were children we all used to find pictures in things. The name for this phenomenon is pareidolia. It is the principle which causes people to discover the face of Jesus or Elvis within damp stains or on pieces of toast, and for us to be able to recognise them too, when they are pointed out to us. It is the principle through which I found the above face in a marble tile on my kitchen floor this morning.
I believe during the Renaissance finding pictures through pareidolia was part of an artist's training. As far as I know, no school of art uses the practice these days. Perhaps it has been forgotten. Or perhaps there is the deeper reason that our entire education system is founded on materialist principles, and Materialism finds Consciousness an embarrassment it cannot account for, so the method may have been as much discouraged as dropped.

The Surrealist Max Ernst used it in his Frottages  In Frottage as in other Surrealist practices such as Automatic Writing the emphasis is on the uncanny and outlandish. The Surrealists, under the influence of Mesmerism, which was widespread and long-lasting in French culture, were inclined to go about their discoveries in passive states such as trance, so they were eager for those discoveries to be otherworldly. They ignored that even in trance, perception is an active process and that even the most naturalistic graphic art has its roots in pareidolia. Without pareidolia we would not be able to see very much at all.
Posted by Caedmon at 4:15 AM