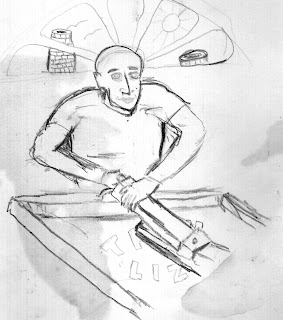 I was going through a draw of old poems when I came across this self portrait. I can't remember doing it, I don't believe I ever did anything in this style ever again. I can't remember why I did it.
I can recognise the time of my life it represents: when I worked as a silk-screenprinter in World's End, the bottom rung of Chelsea's King's Road. Another memory of that time survives in the poem I wrote about a colleague who had the misfortune to be schizophrenic.


Bobby and I, we worked in a print shop,
at lunchtime he whacked on the cans.
Dreamer and drummer, alas now defeated,
conveyor belts tore at his strong black hands.

Walking from home in the hat of his father,
hard winter sunshine caught to his eye,
grey greasy tension, like glass in a factory,
a strong smell of ganja at nine.

Resolutions for girls he'd met during treatment,
promised a job on the Tube,
stuttering laugh now his mouth had been weakened,
frightened of memories of school.

Embarrassed by pictures he'd drawn at the clinic,
calmed by syringe now to work afternoons,
he murmured to windows in deepening shadow
we smoked cigarettes under cavernous rooves.
Posted by Caedmon at 9:47 AM