Pygmies in Yorkshire - a Christmas Story

At this time of year one tends to talk about family. The other day my sister said "Granny was a great storyteller." She was. Her name was Majorie and the Christmas before she died she told me an amazing story. 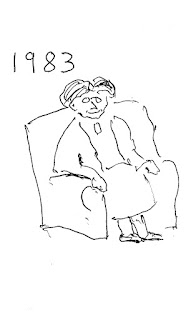 In the first decade of the 20th Century there was a small group of Pygmies from Central Africa living in the grounds of an estate in Yorkshire. My Grandmother was one of six children (as I am). Her family was invited to meet the Pygmies.My Grandmother  told me that the Pygmies were living just as they did in the Congo - in mud huts, dressed in grass skirts.

The Pygmies greeted them with a song, as they greeted all their many visitors. When the Pygmies had finished their song, my Great-Grandfather and his family stood up and snag the Methodist hymn Glory For Me in reply. 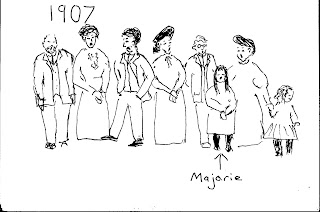 The Pygmies were delighted. Ever since they had arrived in England they had sung to thousands of people. Nobody had ever sung to them. Nobody ever did again. According to my Grandmother, the Pygmies would ask visitors "Glory me?" after that, but nobody understood what they meant.
My Grandmother died the following March. We played Glory For Me at her funeral.

When all my labours and trials are o'er
and I am safe on that beautiful shore,
just to be near the Lord I adore,
that through ages will be glory for me.

This gentleman sings Glory For Me exactly as my Grandmother did. There are some other fine old hymns on his You Tube channel.

An explanation of what the Pygmies were doing in Yorkshire here.

Email ThisBlogThis!Share to TwitterShare to FacebookShare to Pinterest
Labels: Brandesburton, Christmas, Glory For Me. Methodist hymns, my stuff, pygmies