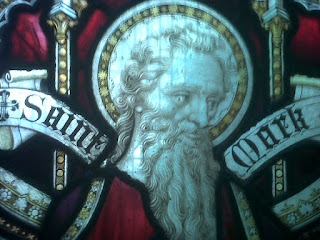 A detail from an aisle window in St Mary, Brookfield parish Church in North London: St Mark by William Francis Dixon. Mark is now the only surviving Evangelist in a four light window; the other three were destroyed by a bomb blast during WWII. The tracery glass, which includes a head of John The Baptist, also remains undamaged
W. F. Dixon was born in 1848 and began his career as an artist with Clayton and Bell. He had his own stained  glass business, with a succession of partners, by the mid 1870s. In the 1890s he moved to Munich to work for Mayer and Co. and died there in 1928.
The window is dedicated to the memory of Mary Cocksedge and was given by her son Walter.
Posted by Caedmon at 12:49 AM

I'm sure I do. Sweet you remember me.

Very good! Glad to see your JH book is doing well. I'll probably download one of your other ones on Kindle soon! X