Jurgen - A Comedy of Justice 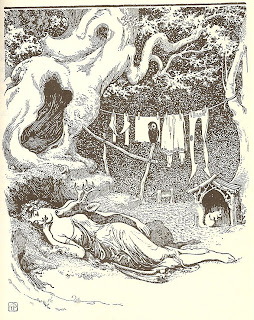 A 40 year old poet running simultaneously to fat and seed suddenly finds himself in the body of his 19 self. The immediate advantage is that he can seduce any woman he comes across, without trying, and sometimes even against his will, So Jurgen, the eponymous hero of the novel by James Branch Cabell is both driven and chased on a knight's quest through a variety of mythological worlds including versions of Heaven and Hell, until he becomes disenchanted with his enchanted existence and gratefully seizes to the opportunity to return to his natural body and his shrewish wife.
First published in 1919, Jurgen was a hit of the jazz age, its popularity boosted by a prosecution by the New York Society For The Prevention Of Vice. Its reputation popped with the stock market bubble and when James Branch Cabell died in 1958 both he and his masterpiece were long forgotten.

It is a puzzle why such a brilliant novel has not even acquired cult status since. From the 1960s the appetite for fantasy ficiton has revived and grown stronger. There is a flippancy to Jurgen which should appeal to those who enjoy Terry Pratchett. or J K Rowling and a strong foundation of serious learning, not quite in the league of a Tolkein or a C. S. Lewis but impressive nonetheless.
The problem may be in the way the flippancy and the learning are arranged. James Branch Cabell was from an old Virgnian family and one of those men who can lose their reverence for the ideals of the society which produced them, but find it more difficult to shed their sense of superiority. His imagination is much coloured by Frazer's Golden Bough, and the reader can never entirely lose the sense of Cabell himself weaving in and out of the scenery to wink and wave at us when he makes a clever reference. He ought to get some credit as a pioneer of magic realism for this post-modrn approach to narration. And the story itslef has enough emotional bite to rise above ephemeral popular taste and shifts of literary fashion.